Women farmers make up a sizeable part of rice production, but they have less opportunities to be productive compared to men. In Odisha, a new initiative is trying to change that.

The International Rice Research Institute (IRRI), together with Access Livelihoods Consulting (ALC) India and the Department of Agriculture and Farmer Empowerment (DAFE), is taking steps to narrow the gender gap for women farmers through a new Women Producer Company (WPC) initiative in the Dharmagarh and Kokasara blocks of the Odishan district of Kalahandi.

According to the Food and Agriculture Organization (FAO) of the United Nations, closing the gender gap in access to productive resources such as land, seeds, credit, machinery, or chemicals can increase agricultural output by 2.5 to 4%, which translates to increased food security for an additional 100 million people.

“The gender gap in access to productive assets, resources, and inputs is well established,” said Ranjitha Puskur, senior scientist and theme lead for IRRI’s gender research. “Due to a multitude of societal and structural barriers, women farmers tend to face serious challenges in accessing good quality agricultural inputs at the right time, place, and at an affordable price. Women’s access to markets tends to be limited, as they are not often recognised as farmers. This also limits their ability to access inputs from formal governmental sources or co-operatives. Through WPC, we can begin to address many of these constraints.”

Led and managed by women, the WPC initiative in Odisha has over 1300 members, and provides comprehensive services that include input provision (seed, fertilizers, bio-pesticides), custom hiring of agricultural machinery, financial services, and even marketing. It also facilitates access to the latest technologies in production, processing, information, and traceability.

For the latest cropping season, WPC has procured seeds and fertilizer from traders at wholesale prices, then sold them to members at less than Maximum Retail Price (MRP) in the market. Stock points have been established from where representatives of Women Farmer Affinity Groups take the required amount for their group, then distribute to their group members. Women farmers, through this arrangement, get inputs at a cheaper rate, close to their doorstep, and on credit. To date, WPC has distributed DAP, urea, and potash to around 650 members, satisfying their fertilizer requirement for the season.

“The WPC also builds the capacity and knowledge of women farmers,” says Puskur. “So far it has trained 78 members in mat nursery raising and machine transplanting. The women trained have become confident in using the machine transplanter independently and are earning extra income selling the mat nurseries. They are excited that the use of mat nurseries and transplanters are reducing their drudgery and contributes to better health.”

For the next cropping season, the WPC initiative hopes to expand its reach and deliver the benefits of its provision services and technology delivery to many more women, contributing to increased incomes and better livelihoods for these farmers and their families.

Distributing fertilizer at the village level 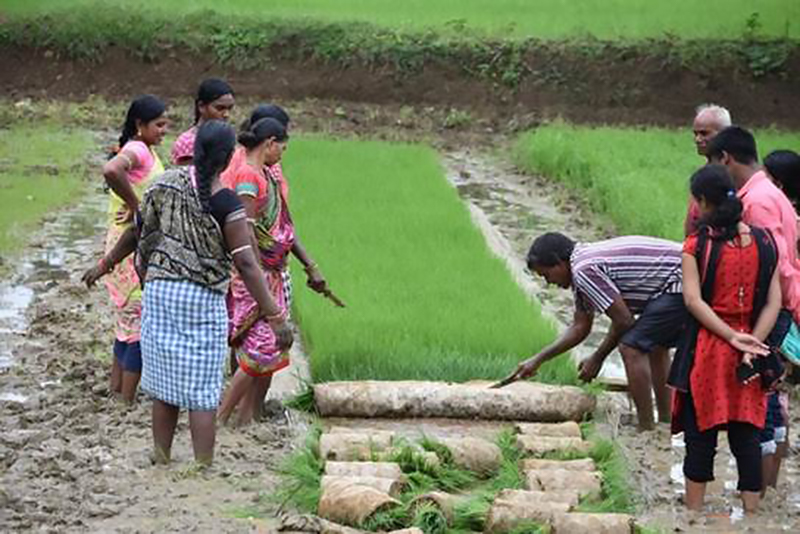