Diversifying rice systems in rotation with other cereals like wheat or maize, high-value crops like potato, legumes, or fodder crops is one way rice farmers can optimize their use of resources. Diversified cropping systems broaden the source of a farmer's food and income, increases their land productivity, and minimizes unpredictable risks such as the build-up of pest and diseases common in rice monoculture.

Owing to market forces, rice-based cropping systems in irrigated and otherwise favorable environments in Asia and Africa – those are areas with sufficient rainfall, good soils, and good market access – are continuously being intensified to include wheat and maize. Rice-wheat systems presently occupy 13.5 million hectares in South Asia’s Indo-Gangetic Plains and another 3.5 million hectares in China. Rice-maize systems are also gaining importance in South and Southeast Asia.

The increasing demand for maize in many Asian countries has led to diversifying rice-rice or rice-wheat systems into rice-maize systems that may also occupy up to 3 million hectares at present. In addition, rice is also grown with other crops like potato, legumes, or vegetables in about 8 million hectares.

Due to continuous long-term rotations and the soil going through cycles of wetting and drying, cereal-based systems, particularly the rice-wheat systems, have shown stagnating and declining yield and productivity.

Rice-wheat systems are becoming more and more unsustainable because of:

To help improve the productivity and sustainability of diversified cropping systems, IRRI along with many partners is developing and diffusing integrated crop and resource management technologies that follow the principles of conservation agriculture. This includes:

There are a number of factors that cause poor crop. A key element is the initiation of vicious cycles that are either too demanding of natural resources or those that do not take into account the other elements of an agricultural system. Although considering the main pests of rice - weeds, insects, pathogens, and others - is good, it is not enough. The entire agronomy cycle that leads from seeds to harvest then consumable product should be considered.

The following are the common culprits for poor crop health 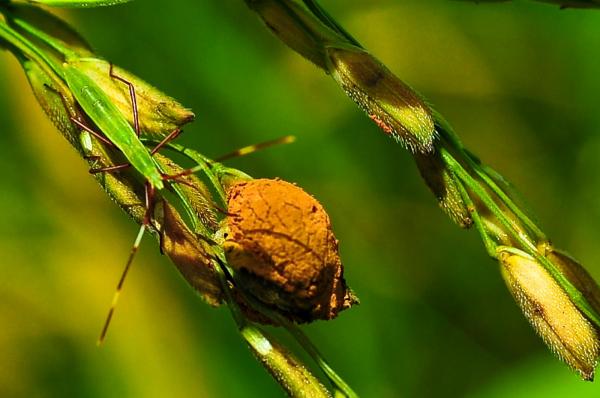 Insects are common in rice ecosystems. Some feed on rice but seldom cause yield loss. A few species, however, can become pests and cause significant production losses. One example are planthoppers, which can become a serious problem during cases of outbreak. They cause damage to rice plants by feeding on leaves and stems and can can cause severe stunting and discoloration or prevent rice grains from forming. These diseases are caused by viruses, which oftentimes the planthoppers carry.

Another known pest is the stem borer so-called because it bores into rice stems, causing the tillers of rice plants to die. Stink bugs that puncture and suck rice grains at maturity are also a major pest group especially in rainfed areas. Other insects that can sometimes cause significant losses are green leafhoppers, which carries a virus causing tungro disease,army worms that are often caused by droughts, and leaf feeding insects such as leaf folders and case worms.

In 2005, 2009 and 2010, planthopper outbreaks affected several million hectares of rice land in Vietnam, China, Indonesia, Korea, and Japan. Planthoppers are only typically present in low numbers in rice fields. Their outbreaks are abnormal, often caused by weather changes and inappropriate management such as misusing fertilizer and pesticides.

Ecologically-based pest management such as techniques on ecological engineering that enhance biodiversity and pest ecosystem regulation services are being used at the landscape level to build resilience on pest invasion and climate change. The most important stewards of rice production systems are farmers and IRRI conducts research to understand their knowledge, attitude, and practices so that researchers can design simple guidelines and procedures for pest management. 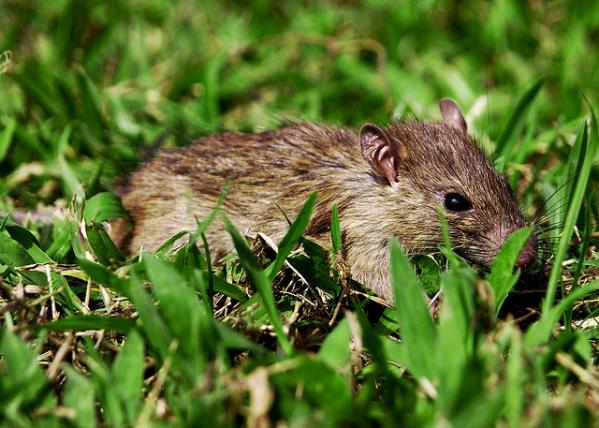 Farmers may not only suffer yield losses through droughts, floods, typhoons, destructive insects, and diseases. They can also suffer high yield losses as well as postharvest losses because of rats. Occasional rodent outbreaks can lead to severe effects on the livelihoods of small farmers.

In non-outbreak years, annual preharvest losses due to rats can be as much as 17%. A 6% rice loss in Asia already translates to enough rice that can feed 230 million people (roughly the population of Indonesia) for 12 months.

Rats can do damage in almost every phase of farming from munching on seedlings to eating stored grain. They also bring diseases. In the Chittagong Hill Tracts of Bangladesh for example, it was reported that rats not only feasted on stored sacks of grain but also invaded houses, destroyed personal possessions, and bit people while they slept. This increased dysentery incidences and fever of unknown causes among people. Though not clinically proven, the diseases were believed to have been caused by rats.

IRRI in close collaboration with many partners helps communities develop and carry out ecologically sound, and cost-effective management strategies against rats. Ecologically-based rodent management (EBRM) has now taken center stage in Asia, Australia, and Eastern Africa for management of rats in agricultural systems. Studies have proven in Indonesia and Vietnam that rat populations can be controlled and successfully managed if farmers work together as a community and apply their control at the right time and in the right habitats. This has led to a 50% reduction in the use of chemical rodenticides.If losses are high each year for a particular rice crop, then a strategy recently developed to supplement EBRM across much of Southeast Asia is the community trap barrier system.

IRRI is currently investigating the breeding ecology of main rodent pests in the Philippines, as well as assessing the impact of rodents in its three regions, studying the response of rodent pest populations to major climatic events (like cyclone Nargis in Myanmar), and looking at the role of different rodent species in carrying a disease called cryptosporidium, which affects both humans and livestock in rural communities.

In the future, some of our initiatives will include areas like fertility control of rodents, managing post-harvest losses, partnering with advanced research institutes for further studies of rodent-borne diseases, and studying the interaction between rodents and weed pests. 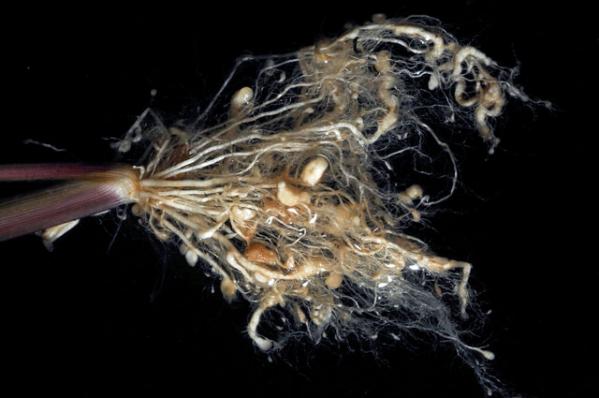 Nesting and feeding within the roots of rice plants, nematodes can cause root 'knots' or galls; stunting; yellowing and curling of rice leaves; poor tillering; and shorter earheads with fewer poorly filled grains. It attacks rice plants in all growth stages.

The rice root-knot nematode is considered one of the limiting factors in rice production in all ecosystems. In upland rice, grain yield is estimated to be reduced by 2.6% for every 1,000 nematodes present around young rice seedlings. Meanwhile, in irrigated rice, damage is caused in nurseries before transplanting or before flooding (in the case of direct seeding). Experiments have shown that 4,000 juveniles per plot of the nematode species, M. graminicola, can destroy up to 72% of deepwater rice by drowning out.

IRRI recommends a combination of approaches (cultural, biological, physical, mechanical, use of resistant varieties, and chemical control) for avoiding or reducing nematodes. 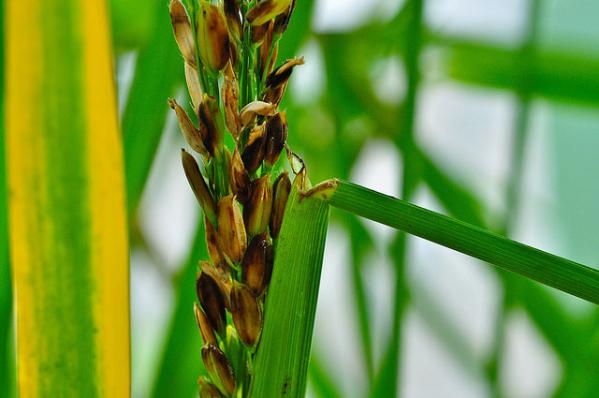 Many micro-organisms such as fungi, bacteria, viruses, and others, cause a wide range of diseases in rice. A disease is an abnormal condition in which a plant is unable to function properly.

These disorders may also be caused by environmental stresses affecting rice plant physiology, and the crop functioning. Examples include low or high temperatures beyond the normal growth limits of rice; deficiency or excess of nutrients in soil and water; soil chemistry and other conditions that can affect uptake and availability of nutrients, toxic substances produced in the soil and reduced light.

IRRI continually searches for rice varieties with natural resistance to diseases and incorporates what are called host-plant resistance genes to newer rice varieties, ensuring they are resistant to specific diseases before deployment in the world's main rice-producing environments. We continuously adapt pest and disease resistance strategies in the context of a changing environment and climate along with rising new needs. 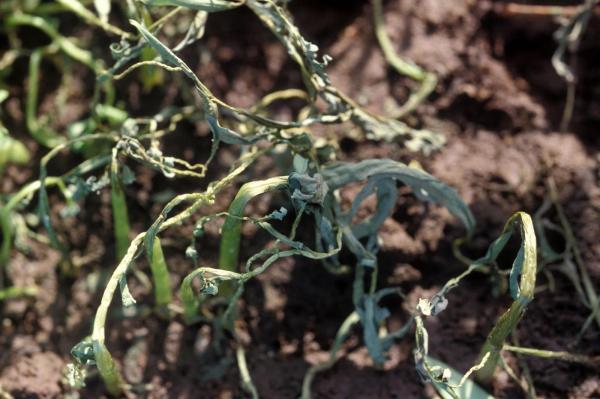 Weeds are a perennial issue for rice farmers. The weeds seen in a field reflect previous crop management and every rice field has its weed problems. Weeds compete for water, light, and soil nutrients and in Asia they are believed to cause yield losses of between 10-25 percent, depending on the way rice crops are established, how floodwater is controlled, and how fields are managed.

Because of problems with increasing labor shortage and costs, farmers in recent years slowly turned from transplanting to direct seeding, where sometimes lack of sufficient field preparation like puddling and water flooding can cause farmers more problems from troublesome weeds. IRRI studies different weed species and looks into environmental factors than can trigger or cause more weed problems in farmer's fields. In both favorable and unfavorable rice ecosystems of South and Southeast Asia, we develop strategies that aim to reduce crop losses, improve input-use efficiency and enhance productivity.

These strategies seek to take advantage of opportunities in cultural practices that include establishment practices, rotations, water management, competitive crops, and fallow management along with manual, chemical, or mechanical interventions.

Illustrated Guide to Integrated Pest Management in Rice in Tropical Asia (English)
Planthoppers: new threats to the sustainability of intensive rice production systems in Asia
About IRRI was here