Africa has the highest reserves of untapped natural resources for food production, especially water and land, in the world. With over 130 million hectares in inland valleys suitable for rice production—but only about 10 million hectares are currently being used— Africa’s tremendous potential in agriculture remains untapped.

IRRI’s efforts in the region are geared towards contributing to food and nutrition security, economic growth by developing and deploying cutting-edge science, designing sustainable agri-food systems, and catalyzing transformative partnerships.

We focus on developing and deploying climate-resilient and market-competitive rice varieties and suitable best management practices for a productive, nutrition-balanced, and profitable rice-based system. These efforts aim to curb the region’s reliance on imports of rice and other food staples and will significantly contribute to the Africa-wide rice development strategy. 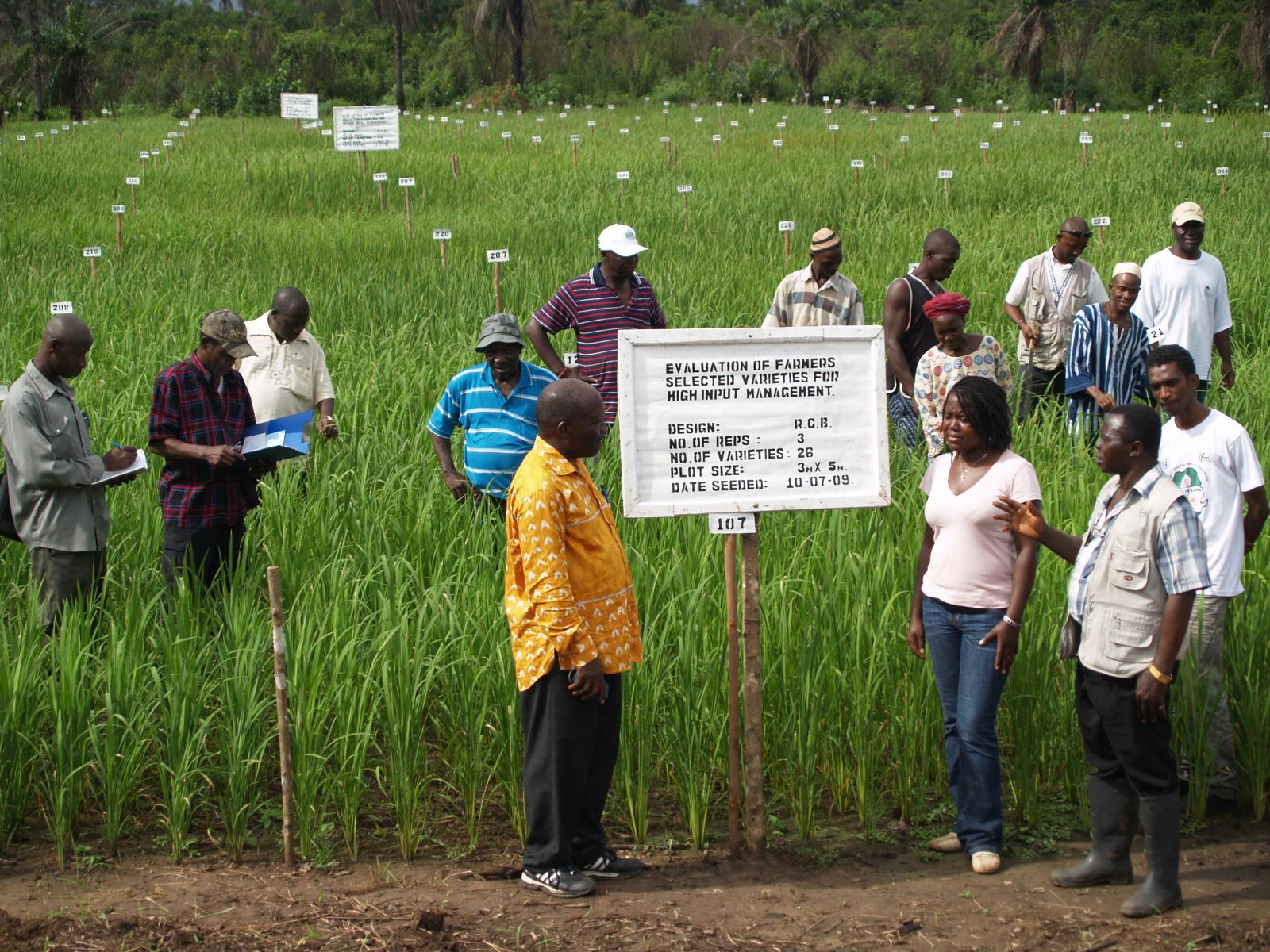 We will enable the development of strategic and effective value chain by strengthening the role of the private sector role and catalyzing enabling policies for engagement. These policies should facilitate faster varietal replacement and speed-up the strengthening of the supply chain, including agricultural inputs, credit, and marketing channels to support the growth of the African rice sector.

Modern breeding approaches are being used to facilitate faster development of tailored rice varieties with broader adaptation and shorter durations for intensive cropping systems. Developing resilient varieties with high yield and quality will encourage farmers to invest in inputs and manage their crops better to double productivity and ensure a productive and profitable rice-based agri-food system. Management strategies that optimize resource use and augment farmers’ revenues need to be developed to maximize the potential of the new varieties within efficient and sustainable production systems. Considerable gains could be made by replacing the current traditional systems with modern agronomic principles and practices. As part of improved agri-food systems, new crops and vegetables will improve the incomes of the farmers as well as consumer access to better nutrition.

Seed systems that allow farmers access to good quality seeds of improved rice varieties in a timely manner need to be built and strengthened. Africa’s public sector is relatively weak, thus the role of farmer-managed seed systems, establishing community-based seed banks; and commercial seed production by the private sector becomes indispensable. Strengthening the private sector’s capacity and engagement could also facilitate the provision of fertilizers and other agrochemicals.

Capacity strengthening across the value chain

Unlike in Asia, rice is a relatively young crop in some African countries. It only recently became a priority crop. Enhancing the capacity for rice research and strengthening the whole value chain are both indispensable for rice sector development. A critical mass of post-graduate researchers is needed to lead local research and extension activities of partners, including the private sector and NGOs. Technical staff could be trained through short-term, hands-on courses to fill in the current gaps in domain expertise.

Efforts to integrate the rice industry innovations into the local rice value chain are ongoing through partnerships, education, and technology development and transfer. These efforts aim to maximize the impact and produce substantive benefits for rice farmers, producers, and consumers.

Countries where IRRI is active

Since its introduction in 1907 in Kenya, rice has become the third most important cereal crop after maize and wheat. Due to the progressive change in eating habits of Kenyans, particularly in more urban areas, the annual consumption of rice is increasing at a rate of over 12% in the country. Moreover, the national rice consumption is estimated at 949,000 metric tons compared to an annual production of 180,000. With a projected population growth rate of 2.7% per year, the estimated annual national need can reach up to 1,290,000 tons by 2030 (National Rice Development Strategy-2, 2019-2030). Read more

Rice is one of the major food crops in Mozambique, along with maize, wheat, and sorghum. However, rice consumption has increased rapidly in recent years, from 86,000 metric tons in 1990 to 519,000 metric tons in 2010, at an annual growth rate of 8.6%. This shift in consumer preference, like other African countries, is attributed to urbanization, better income and rice’s convenience in preparation. Read more

In Tanzania, rice is the second most important food and commercial crop after maize with significant national importance as a source of employment, income, and food security for millions of rural households. The country has a rapidly growing population and a political ambition to sustain rice self-sufficiency, with a margin to export to neighboring countries in the region, through raising productivity and expanding production to areas with high potential for rice production. Read more

The Stress-Tolerant Rice for Africa and South Asia (STRASA) project was started by IRRI at the end of 2007 in collaboration with AfricaRice. STRASA aimed to develop and deliver rice varieties that are tolerant to abiotic stresses for the millions of farmers in rainfed rice-growing environments in the two continents.

STRASA, which ended in 2019, delivered improved varieties to at least 18 million farmers and with significant spillover impacts in non-participating countries, particularly in the use of stress-tolerant rice varieties and regional cooperation through seed exchange agreements.

Building on the success of STRASA in developing and delivering improved rice varieties in South Asia and Africa, the project Accelerated Genetic Gain in Rice (AGGRi) Alliance continues to strengthen IRRI’s partnerships with the national research and extension systems in the region to increase rice yield and improve livelihoods of rice farmers and consumers.