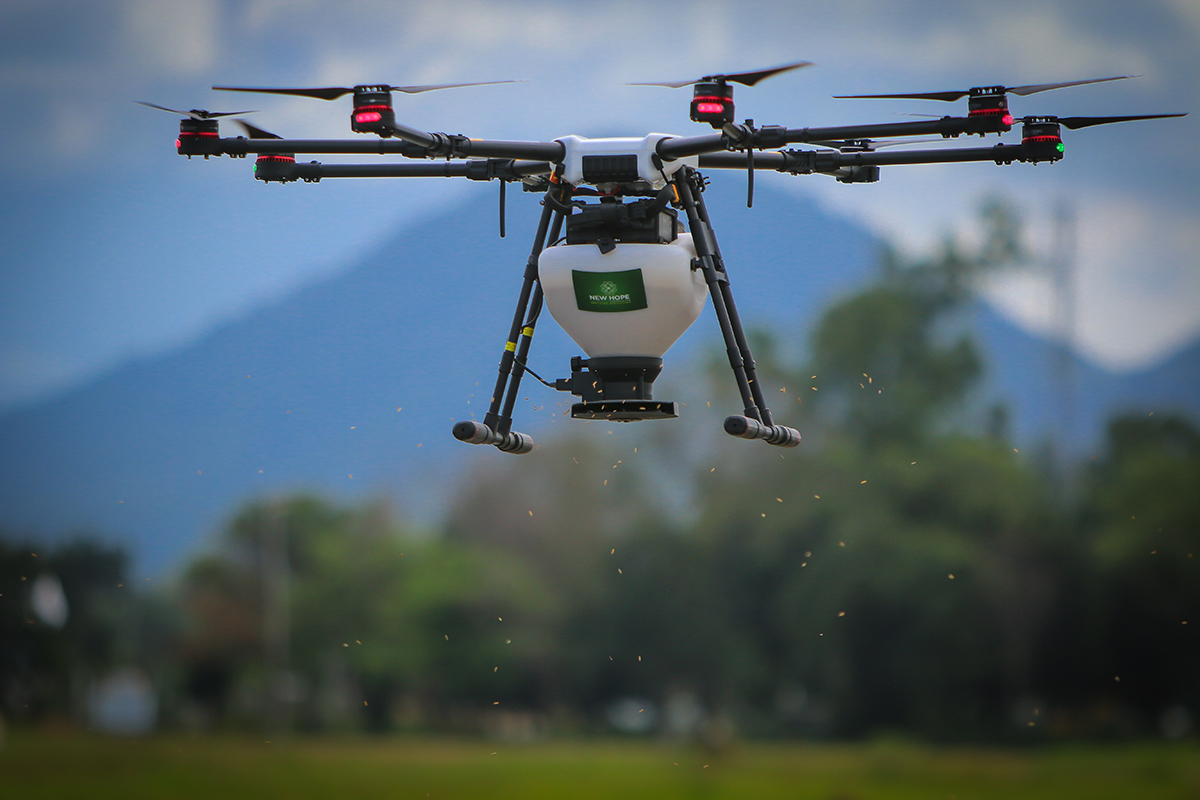 As it works toward building a smarter and sustainable rice sector, IRRI draws on the strength of its innovation edge for new ideas that will address upcoming challenges in crop production and productivity. In 2018, IRRI partnered with government and private organizations in its relentless pursuit of innovations that benefit farmers and push the limits of rice science into new disruptive territories. These are some of the groundbreaking explorations centered on bringing the newest technology into the farmer’s field.

IRRI, together with the Odisha Department of Agriculture and the Odisha State Seed Corporation, is connecting global innovative solutions to local needs through a mobile application and web-based Management Information System portal.

SeedCast, the mobile app, estimates seed demand by farmers in the state and will help streamline the demand and supply of seeds for different varieties of rice. The app is seen as a solution for seed corporations that have been grappling with the issue of estimating demand for seeds at the start of the kharif season.

“SeedCast will make the seeds supply chain robust by helping dealers indicate their demand through a formal platform,” said Dr. Manzoor Dar, IRRI cluster leader for Seed and Delivery Systems and Germplasm Evaluation. “The data generated by the app can be viewed and analyzed which will help state functionaries and the state seed corporation plan accurately for seasonal seed production and procurement, and facilitate better seed availability according to demand.”

Bacterial blight is a major rice disease that severely affects rice production in Asia. In irrigated environments, bacterial blight can easily spread to large areas causing up to 30% in losses and a huge impact on the income of smallholder farmers.

Major genes called Xa genes (e.g., Xa4, Xa5, Xa21), have already been used in rice breeding programs for developing varieties that have some resistance to the disease. However, despite the importance of these genes in controlling the disease, the bacterium adapted to these resistant varieties making them susceptible again. There is a need to continue discovering new ways and developing varieties that can protect farmers from losses caused by bacterial blight.

In a recent paper published in PLOS One, scientists discovered variations of the SWEET (sugars will eventually be exported transporter) genes that give plants resistance to Xanthomonas oryzae pv. Oryzae, the organism that causes bacterial blight.

Under normal conditions, the pathogen promotes the leakage of sugars by activating the SWEET genes inside the plant cell. However, the new SWEET gene variants prevent the release of sugar and the bacterium fails to get nutrition from the host plant and it eventually dies. The gene naturally occurs in rice and offers a promising strategy to gain resistance against bacterial blight.

“Using IRRI’s rich germplasm collection, we were able to discover the potential of variations in the SWEET gene to be used in breeding new blight-resistant varieties,” said Dr. Ricardo Oliva, a plant pathologist at the institute. “The variations appear to have emerged from at least three rice subspecies. This opens up the gates to use similar techniques to fight other pathogens in rice as well as in other crops such as corn, wheat, and cassava.”

At present, the SWEET gene variants have been introduced into IRRI’s breeding pipeline and a new class of rice varieties resistant to bacterial blight will be available in a few years.

A new study published in Nature opens the possibility of accelerating rice breeding to achieve food security for some of the world’s most vulnerable rice farmers.

Genomic variation in 3,010 diverse accessions of Asian cultivated rice maps the largest set of genomic variants for a crop species. This recent research revealed that there are significant variations in gene content and immense sequence variation among the 3,000 rice genomes. Researchers identified more than 10,000 new rice genes and over 29 million simple variations throughout the genome. Additionally, within the two major rice variety groups, the analysis revealed the existence of previously unreported populations that are unique to specific geographic origins.

A collaboration among IRRI, CAAS, BGI-Shenzhen, and 13 other partner institutions, the research will enable scientists to discover new gene variants and characterize known genes for important traits such as the natural ability of a particular variety to resist diseases and withstand floods, drought, and saline water. Additionally, molecular breeders could use the genetic markers to select rice plants that are more likely to carry the desired trait before they are planted in the field.

“This year, we were able to develop new populations and parental lines for breeding, new hybrids for testing, and new DNA markers for forward breeding,” Jauhar Ali, coordinator of the Hybrid Rice Development Consortium (HRDC), reported at the 2018 HRDC annual meeting. “These advances generated more resources and opportunities that enabled HRDC members to develop high-performing varieties.”

Collaborations between IRRI and private partners in hybrid rice research and development significantly accelerate and broaden the distribution and delivery of improved seeds to farmers globally. “These agreements are expected to generate benefits not just for HRDC but, more importantly, for the smallholder farmers who will use the developed hybrid rice varieties,” said Dr. Ali.

One of the highlights of the two-day meeting is a series of discussions led by IRRI scientists on using bacterial genomics for effective pathogen monitoring in rice, the potential of direct-seeded rice hybrids in maximizing productivity and environmental sustainability in Asia, and the impacts of hybrid rice in the yield and income of smallholder farmers. 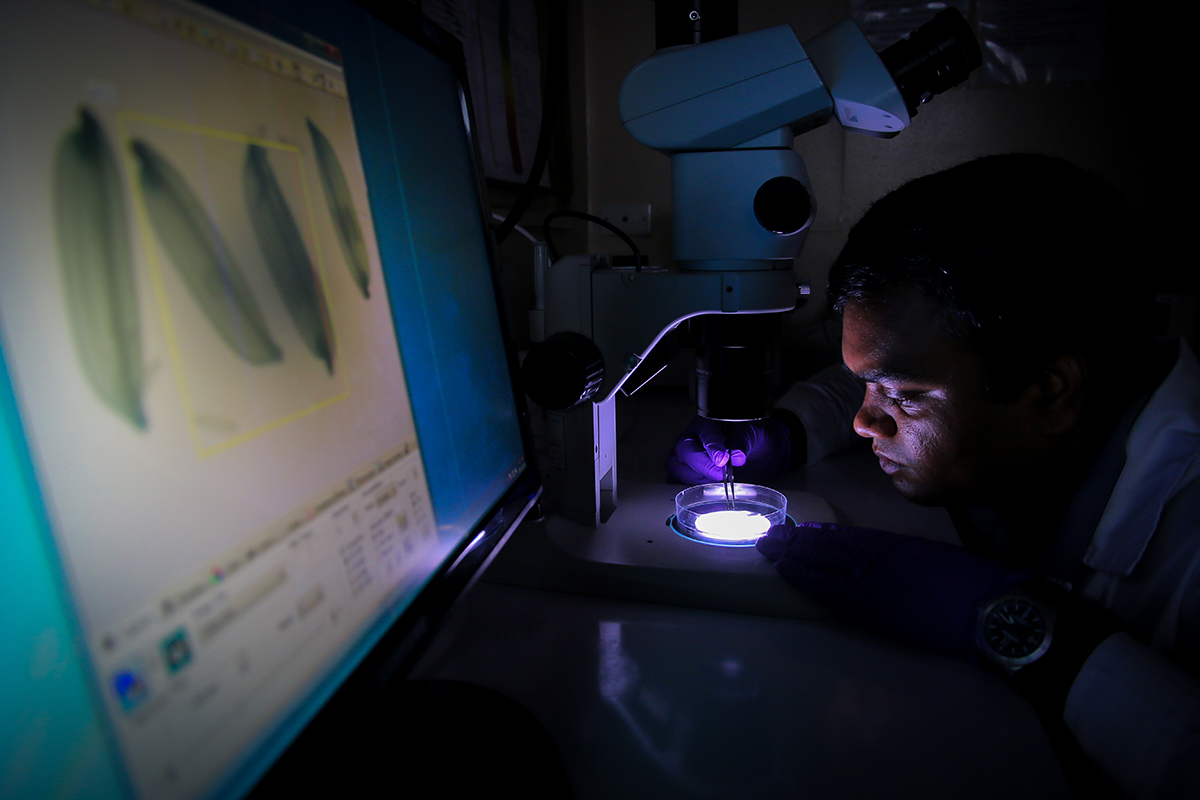 IRRI teamed up with Germany-based biotechnology company Computomics GmbH to use the latest bioinformatics tools to mine the big data available at the institute. IRRI’s 60 years of expertise and rice breeding information will be harnessed by Computomics’ artificial intelligence (AI) systems using powerful algorithms to process and analyze billions of phenotypic, genotypic, grain quality, progeny, and environmental data. The goal is to speed up rice breeding efforts and score millions of potential new rice crosses and varieties with higher yields, better nutritional content, or stronger resilience to climate change.

IRRI entered a 4-year agreement with Australia’s Commonwealth Scientific and Industrial Research Organization (CSIRO) to collaborate on transgenic research for functional diversity in rice to develop novel strategies for resistance to diseases such as rice blast. The restricted-use agreement will allow IRRI and CSIRO to share research and expertise, and allow each other usage of proprietary IP for use in the collaborative program. Aside from disease resistance, other projects covered in the agreement include promoting higher stability and nutritional value in bran oil, increasing leaf oil production, and development of a rice protoplast system.

IRRI entered into a partnership with Intertek, a Total Quality Assurance provider, for the broader distribution and active use of IRRI’s DNA markers for marker-assisted rice breeding programs in the public and private sectors. The same DNA markers can be used for quality control along the rice value chain. Through this agreement, Intertek will provide a volume of sample analysis to the institute to contribute to IRRI's breeding programs.

A funding and research collaboration between IRRI, the CAAS, and BMGF will focus on developing Green Super Rice. Green Super Rice is a mix of more than 250 different potential rice varieties that can adapt to difficult growing conditions such as drought and flood. The lines also use less fertilizer and no pesticides, which reduces the need for herbicides. At present, more than 130 advanced breeding lines with these traits are undergoing national varietal testing and will soon be released in different countries as new varieties. Forty-two Green Super Rice varieties have been developed and have been made available in 11 countries in South Asia, Southeast Asia, and East and South Africa as of 2017, covering more than 1.7 million hectares of farmland. Eighteen of these varieties were bred at IRRI.