Experts from the Chainat Rice Research Center (CRRC) and the IRRI-CORIGAP Project conducted a joint workshop on Adaptive Research for Target Groups and Best Practices from the CORIGAP Project last 28-30 November 2022 in Chainat Province, Thailand. The workshop aimed to share project best practices and technologies among the broader groups under the Thai Rice Department (RD), capture their perceptions on effectiveness and relevance of the presented interventions, and ultimately help them replicate and integrate these into their division’s agenda even after CORIGAP’s closing.

The workshop was organized by Duangporn Vithoonjit of CRRC and attended by 35 officers from 17 centers under the RD. Duangporn delivered an overview of the project, its scope in Thailand, and the piloted rice production best practices and technologies as part of the cooperation between IRRI-CORIGAP and the department’s Research and Development Division. IRRI scientists Caling Balingbing and Anna De Guia shared presentations on laser-assisted land leveling as a sustainable method for land preparation and one of the ways to close rice yield gaps, and indicative findings of a survey conducted in 2018 presenting the socio-economic changes, productivity, and perception of Thai farmers on best management practices, respectively. 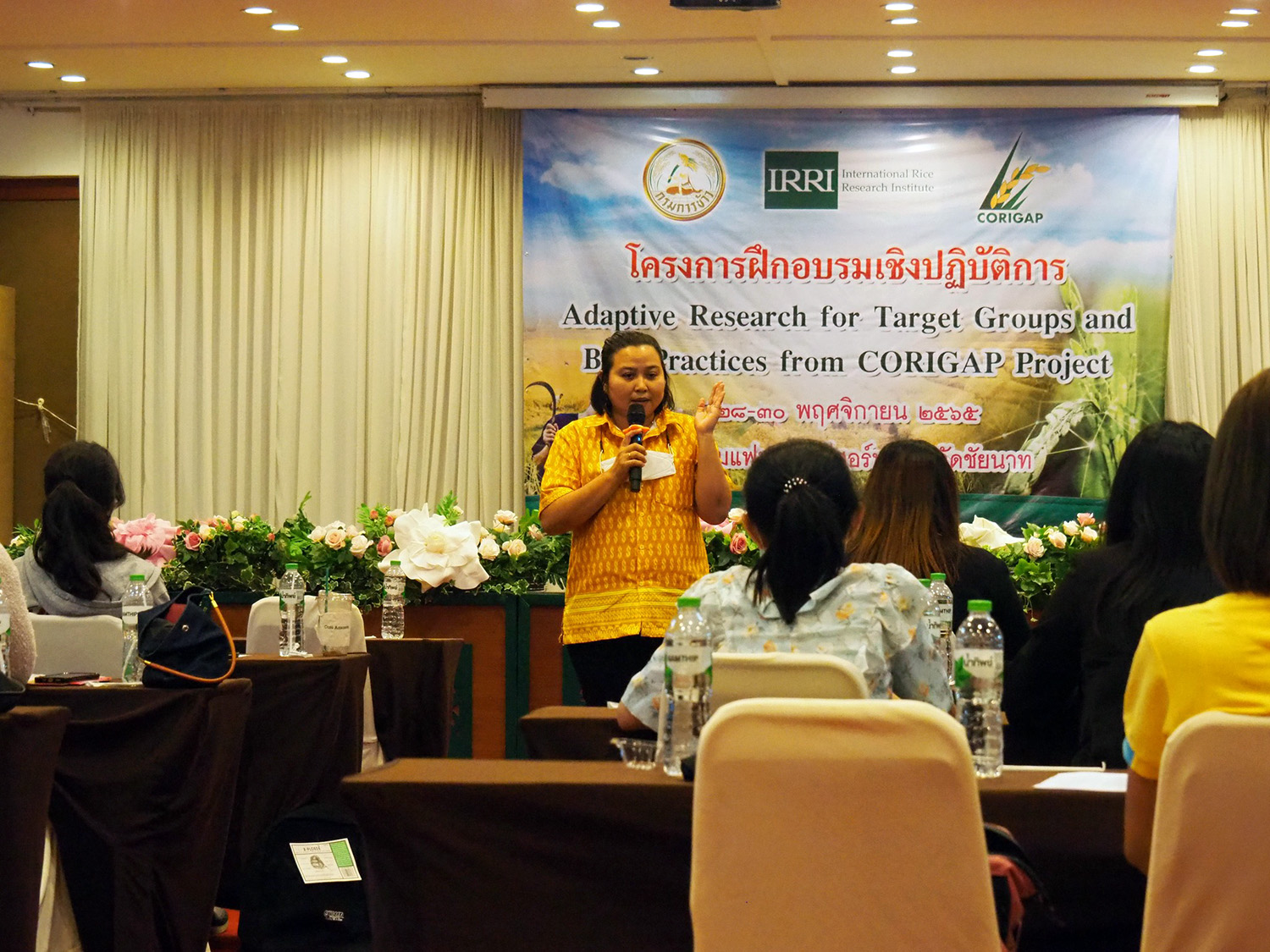 Vithoonjit also spoke more about the economic benefits of the Cost Reduction of Production (CROP) in rice in Thailand, as a cost-reducing mechanism in farms, led a session on nutrient management and chemical fertilizers based on community-based soil analysis, and co-led a practical exercise on Laser Land Leveling (LLL) operation and technology with Balingbing. The latter then shared cross-country experiences and collaboration on rice straw management research that CORIGAP had done in Vietnam and the Philippines and  discussed the economic feasibility of laser land leveling over multiple business models, which garnered interest from the participants on a technical and operational level.

Perspectives from the participants

To level expectations, there were 35 (25 females, 10 males) participants from selected rice research and seed centers in the Central Plains region, most of whom are extension officers, researchers, and trainers in the field, and had no previous involvement in any CORIGAP activities.

At the end of the sessions, all participants expressed that they are keen to be part of activities similar to what CORIGAP has implemented in Thailand. Laser land leveling garnered the interest of most of the participants. Given that only 35% of them had seen LLL in actual demonstrations, most realized the value of further capacity building to facilitate the potential demand for laser-leveled farms. Identifying the most suitable business model for providing laser land leveling services to farmers was considered imperative, given the variability in the scale of rice landholdings in Thailand and the capacity of farmers to avail of such services. 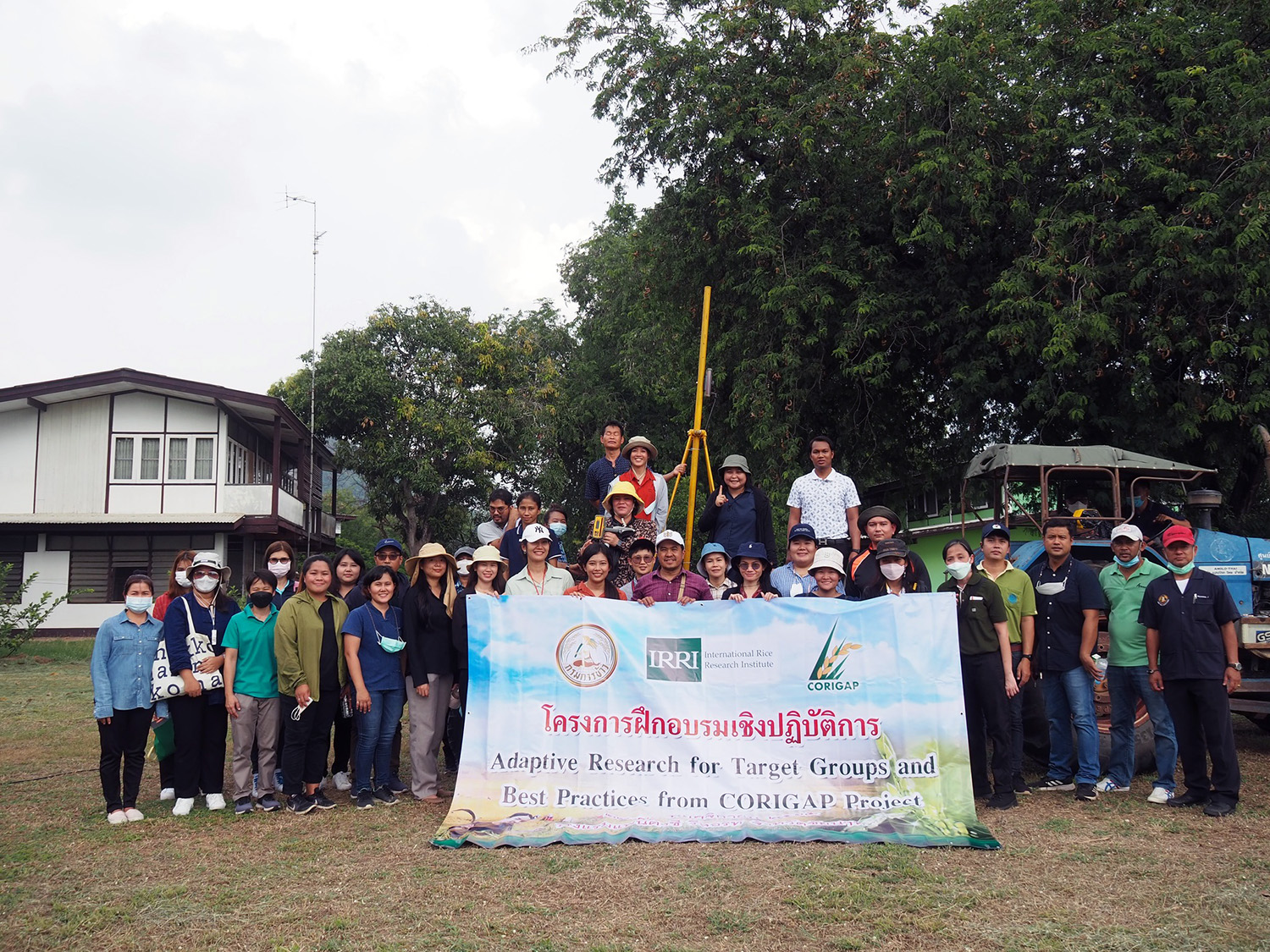 From the participants’ survey, water and fertilizer management were identified as two of the key issues that need to be prioritized. It was also found that some farmers still counterintuitively apply chemical fertilizers beyond the optimal level. While there have been some provisions for community-based soil analysis in Thailand before prescribing specific types and quantities of chemical fertilizers to farm, the participants were keen to broaden their knowledge of better fertilizer management and AWD.