This dark outlook deepens the hardship of people who have lost income due to the lockdown and economic stoppage. While an economic slowdown has many negative impacts, one of the most important is the fall in real income. A substantially lower disposable income can weaken food security among the poor, as people find it more difficult to afford the food they want. In Asia, where rice is the main food staple, we expect that variations in income will impact rice demand. More precisely, falling income is expected to force poor people to shift to less expensive staples. Thus, a key question is the extent to which the current economic slowdown may raise the demand for rice. A related question is whether the global rice system is capable of supplying this demand and can avert any negative impact on rice-based food security. The answers to these questions have important bearing on the type of policy interventions that governments should contemplate to address poverty and food security risks, especially in developing countries where large fractions of the population are already suffering from limited or erratic access to health care and other essential services.

The COVID-19 pandemic, initially seen as a public health crisis, has triggered two types of GDP forecasts, one in which output continues to grow but at a slower rate than before, and one in which there is no growth but instead a period of fall in output, as shown in the recent projections by the World Bank and the International Monetary Fund. The former refers to economic slowdown, while the latter to economic downturn. An example of economic slowdown is the 2.3% GDP growth forecast for China in 2020 (see Figure 1). In contrast, the GDP growth forecast in 2020 for Thailand is -3.0%, which means that the economy is projected to contract.

In Figure 1, we capture past and projected economic slowdowns or downturns. During the 2008-2009 global financial crisis (GFC), economic slowdowns and downturns were noticeable for major Asian economies where rice plays an important role for food security and diets. In the case of India, real GDP growth slowed down in 2008 but recovered in the following year. Another major slowdown in these Asian countries was last seen in the aftermath of the 2011 financial crisis.

It is important to remember how fast the world’s attention turned to agriculture to address the food security crisis that resulted from those economic crises. While the current COVID-19 health crisis originates outside the financial system, the connections to and implications for the food systems and ultimately food security have been rapidly established (see IRRI, WFP and IFPRI for examples). Food systems have been and will continue to be impacted at multiple levels and in multiple ways through first order (drop or shift in demand, supply disruptions, labor shortage, trade restrictions, etc.) and second order economic effects (economic recessions, massive unemployment, inflation risks, etc.). The impact of the COVID-19 crisis on rice-based agri-food systems is expected to be much more serious and deeper than the 2008-2009 GFC. Containment efforts to address the pandemic have already severely disrupted farm supplies such as seed, fertilizer, and other agro-inputs. The lockdowns imposed in countries heavily impacted by the COVID-19 pandemic have also created important labor shortage and migration within countries (e.g. India).  This could result in a higher rural wage rate if limited labor availability continues.

The lockdowns are also changing the behavior of consumers. They have been stockpiling food and other essential items. Consumers have also tended to change their spending expectations, anticipating a much longer negative financial impact of the crisis. According to a recently published McKinsey & Company article, the outlook of consumer spending is gloomy for most European countries, while for countries like Brazil and Japan the spending propensity would be impacted less. 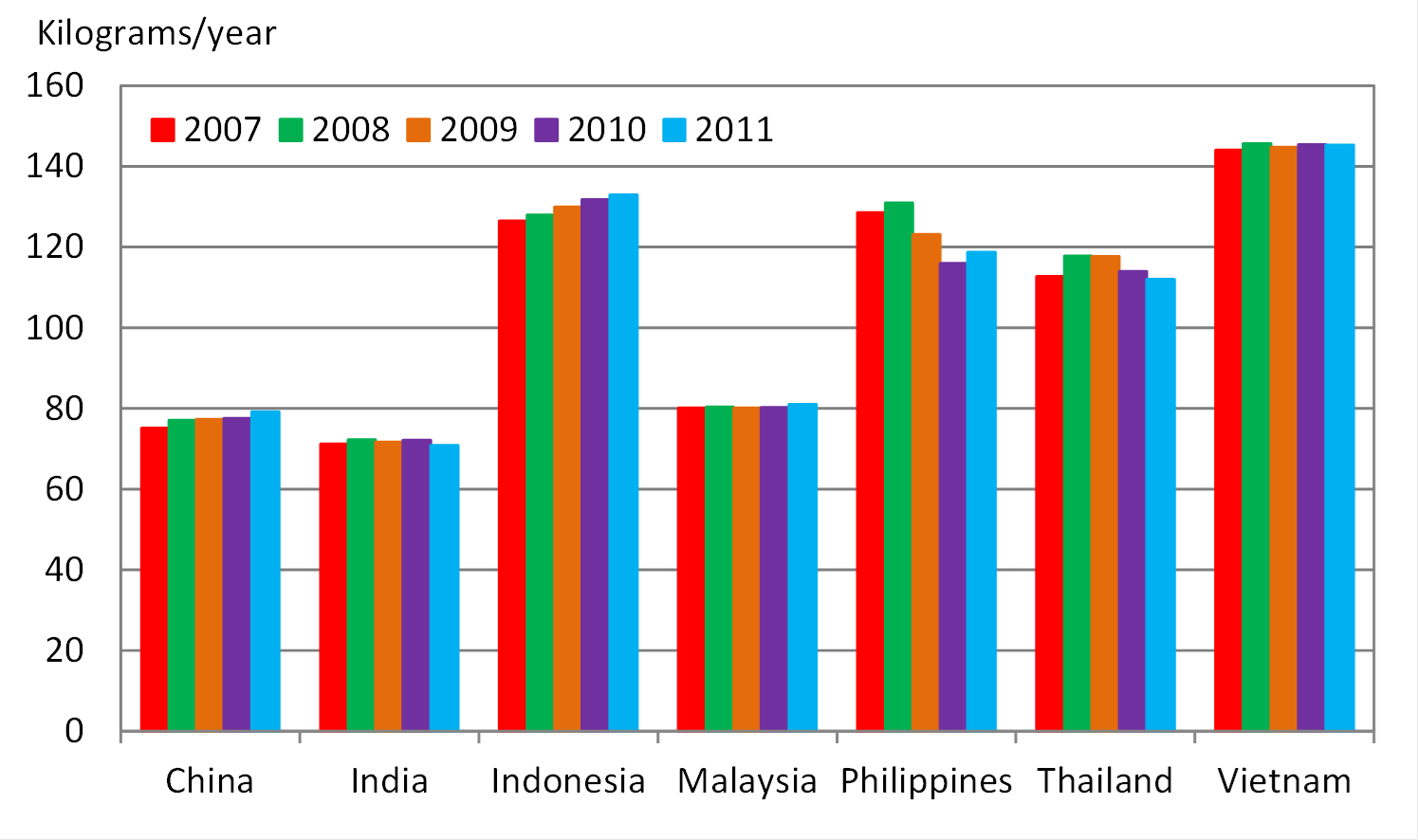 For the food security of Asian countries, one obvious consideration relates to the availability and affordability of rice. During the past episodes of global economic slowdowns and ensuing food crisis, per capita rice consumption rose in most of the rice-importing countries including China, Indonesia, Malaysia, and the Philippines (see Figure 2). Notice too that the economic slowdown in 2008 has coincided with increases in rice consumption in large rice-exporting countries such as India, Thailand, and Vietnam.

We argue that the COVID-19 pandemic could also impact food access, and more particularly rice demand, for three main reasons. First, the traditional distribution (retail, restaurants, and food stores) and logistic (ground, air and maritime transportation, as well as processing) channels have been disrupted. Second, employment has declined and incomes have been suppressed, especially for wage earners. Third, food prices have already been negatively impacted in many countries. The price of rice has increased in many Southeast Asian countries between early March and mid-April 2020 as reported by Reuters.

The combined effect of these forces could lead to a shift in rice demand. As the income of families will decline substantially, households will spend less on relatively more expensive food items like meat, milk, vegetables, and fruits. Hence, in most Asian countries where rice consumption per capita is already high, we could see both a moderate increase in rice consumption per capita and an overall increase in rice consumption due to the fact that more people will have fallen below the poverty line. For them, the only affordable food is likely to be rice. However, these poor consumers are already negatively affected by the price spikes for rice, which further compounds their purchasing power (see real price levels in Figure 3). These two mechanisms (contraction of incomes and higher rice prices) have the potential to worsen the food insecurity situation of the most vulnerable and poorest segments of the population.

Fortunately, at the onset of the COVID-19 health crisis, the rice market fundamentals were robust. There has been no reason to expect supply problems in the short-term, as pointed out in the earlier policy brief (see IRRI).  Rice production in Asia has actually exceeded consumption in the last four years by an average of 34 million tons. The record production that the region has reached during this period was mostly driven by yield growth rather than area expansion. However, rice yields are plateauing in most countries. Further increases in productivity will require investment in genetic improvement, best crop management practices, and post-harvest technologies. Looking into the future

It is still unclear how bad the economic slowdown will be in 2020 and how long it will last. However, there is little doubt about its relevance for rice-based food security.

Rice remains the anchor of food security in Asia. As we explained, rice demand is expected to rise. If this demand is not matched by a concurrent increase in supply, prices are likely to increase sharply. A scenario where rice supply would be less than expected in 2020 cannot be ruled out given the multiple threats that the COVID-19 pandemic and its ramifications have caused to global food systems. Under a scenario of prolonged lockdowns and restrictions of movements of people and goods, rice supply could be constrained by shortage of labor, especially in many poorly mechanized countries, and other disruption to input supplies. Critical activities could be affected, including planting, transplanting, weeding, harvesting, and even processing. As the past economic slowdowns have shown, a credit crunch is likely in the wake of the current COVID-19 crisis. This in turn would further tighten funding for agriculture as well as for agricultural research for development. This is a sobering scenario as too many people remain mired in poverty in Asia, especially in rice-importing countries of the region.

Given the dangers of a global and long recession, our view is that policy makers and donors must consider the short-term challenges of the global rice sector. To tackle higher rice demand through adequate supply and to help bolster rice-based agri-food systems resilience against future economic shocks, it is important to revitalize rice yield growth. This requires increased investment in the global rice sector, especially in research and infrastructure development. Furthermore, the resilience of the poorest consumers and most vulnerable households need to be addressed by providing adequate safety nets. These families would be protected when, and even before, the income shock threatens their food security. A suitable approach in this direction would be to expand existing cash transfer programs, or to develop such programs where they do not exist yet. Policy makers, however, would have to ensure that safety nets are well-targeted to the poor and are endowed with enough fiscal resources.

The question is no longer whether the looming economic recession will depress income levels, generate widespread unemployment, and result in increased rice prices ultimately affecting food security, but rather when. It is also very likely that this unprecedented crisis will translate into increased rice demand in Asian countries where rice dominates the traditional diets. These countries represent roughly 55% of the world population, or around 4 billion people.

Dwindling investments to strengthen agricultural research and development in the recent past reflects donors’ neglect of increasingly visible risks. The international community must recognize that investing in agriculture, and rice-based agri-food systems in particular, is a priority for world stability once again.  The COVID-19 pandemic compounds the challenges posed by climate change to build more resilient rice-based agri-food systems. This is the time to bolster investments in the global rice sector to ensure sufficient food will continue to be available to feed the world. There is no time and space for complacency, given the growing threat to food insecurity.

The analysis and opinions expressed in this piece are solely those of the authors and cannot be attributed to IRRI.