IRRI and China have been collaborating for more than 30 years. A key partnership began in 1997 through a mega-project intensively focused on rice research and training. This huge undertaking of 12 collaborative projects resulted in 49 super rice varieties being released in China since 1999. Yields increased to as much as 12 tons per hectare.

China is the world's largest producer of rice, with 207 million tons produced in 2014. China's average yield is around 6.5 tons per hectare, among the highest in Asia.

Archaelogical finds suggest that a community of early rice growers existed in China as far back as 8000 B.C. Today, rice is cultivated across eastern and southeastern China. More than 90% of China's rice is irrigated and, in some areas, two crops per year can be grown. 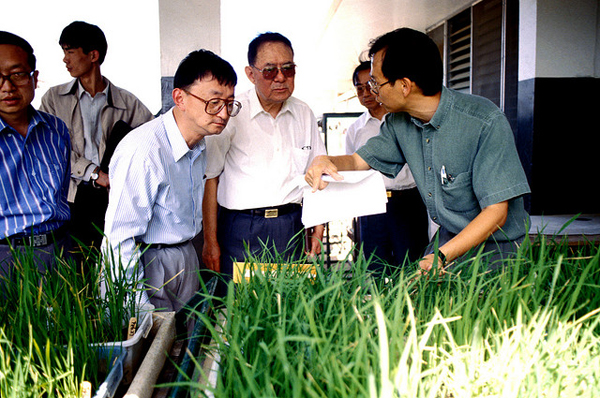 China's partnership with IRRI began in 1974, when then Director General Nyle Brady provided China with seeds of IRRI-developed varieties during a one-month tour of the country. This jumpstarted IRRI's formal scientific collaboration with China, facilitating the development of the country's rice economy. Initially teaming up with the Chinese Academy of Agricultural Sciences (CAAS), IRRI and its partners eventually released four rice varieties in China, namely, Golden Shuttle 1 and Zhongyu 1, 4, and 6.

A key IRRI-China partnership was in a mega-project that began in 1997, intensively focused on rice research and training. This huge undertaking of 12 collaborative projects resulted in the release of 49 rice varieties in China since 1999 -- each with potential for higher yields.

IRRI frequently sends high-level delegations to China and regularly hold workshops and meetings there to undertake research and foster collaboration. China contributed a total of US$3.1 million to IRRI's research between 1984 and 2011.