IRRI has been working in Myanmar since 1965, through partnerships and collaborations with government research and extension agencies, agricultural companies and producer associations, international agencies and donors, a range of NGOs, farmers and farmer groups.

IRRI’s work in Myanmar has involved the development and promotion of improved rice varieties, along with a range of agricultural innovations including: improved land preparation; new planting and transplanting technologies; and a range of best crop management practices, including for fertilizer use, pest and disease management, and improved water use efficiency. IRRI has also worked on the development of mechanized harvesting; improved threshing, drying, and storage; and improved crop residue utilization, especially for rice straw and husk. Since 1965, IRRI has developed the capacity of its government and private sector partners, including women, along with the development of agricultural value chains and market systems. This includes for rice farming systems, and for rice-based diversification through the development of rice-pulses and rice-fish farming systems.

The former IRRI Director General, Dr Robert Chandler was first invited to visit Myanmar in 1968. This started the exchange of scientists between Myanmar and IRRI that has continued over the years. In 1975, Dr Kaung Zan, General Manager of the Agricultural Research Institute of Myanmar, became a member of the IRRI Board of Trustees, and served on the board until 1977. 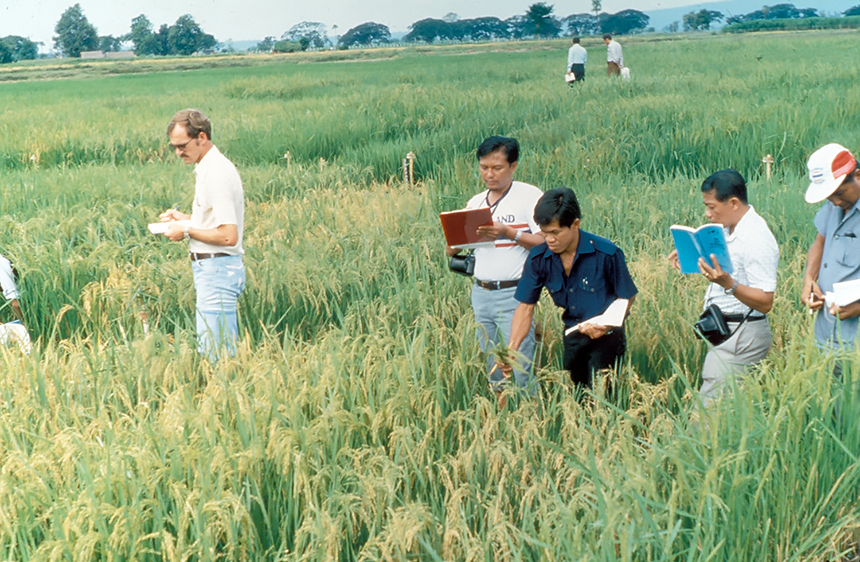 The Myanmar Agriculture Service (MAS) and IRRI signed a Memorandum of Understanding in 1977, that opened the way for the subsequent two phases of the IRRI Myanmar Cooperative project from 1981 to 1985, and the IRRI Myanmar Farming Systems project from 1985 to 1989. These projects were for varietal improvement, rice farming systems, the development of small-scale farm technologies, and training through degree and non-degree programs. This was funded by the Canadian International Development Agency (CIDA) and the International Development Research Centre (IDRC).

With over two decades of increasing collaborative research and development activities between IRRI and the Ministry of Agriculture in Myanmar, both parties agreed to establish a representative office in the country to support strengthening the long-term partnership.The first IRRI Office was established in the city of Yangon in 1990.

In 1993, the operating plan for a new IRRI-Myanmar Upland Farming Systems project was signed by Dr. Mya Maung, Managing Director of MAS, and Dr. Klaus Lampe, the IRRI Director General. It was jointly funded by MAS, IDRC, and IRRI. The two-year project was for research on low-cost, sustainable, rice-based farming systems in the hilly regions of the country. From 1994 to 1995, the German Freedom from Hunger Campaign provided additional support to improve farming system productivity and sustainability in the uplands.

In 1997, the Government of Myanmar recognized IRRI as a valued long-term partner for international collaboration through its Ambassador to the Philippines. MAS and IRRI subsequently signed the Myanmar-IRRI Work Plan Agreement for collaborative research activities from 1997 to 2000. These activities included genetic resource use, agricultural mechanization, integrated pest and disease management, community-based natural resource management, geographic information systems, and training. In 2003, MAS and IRRI again signed an agreement for collaboration in agricultural research and training from 2003 to 2006.

In 2008, IRRI came to Myanmar’s aid after the devastation of cyclone Nargis, with IRRI’s scientists helping the Myanmar government to draw up plans to increase rice production following the devastation caused by the cyclone.

The ADB-funded IRRI Postharvest Project conducted training and promotion activities for postharvest technologies during 2012. This project ensured the sustainability and success of the improved rice dryer technology that was subsequently widely adopted in both Myanmar and Cambodia.

In April 2013, the Republic of the Union of Myanmar. through the Ministry of Agriculture and Irrigation, ratified and confirmed the Agreement recognizing the International Legal Personality of the International Rice Research Institute (IRRI), which was originally signed in Manila, Philippines in 1995 by ten countries, including the Myanmar government. 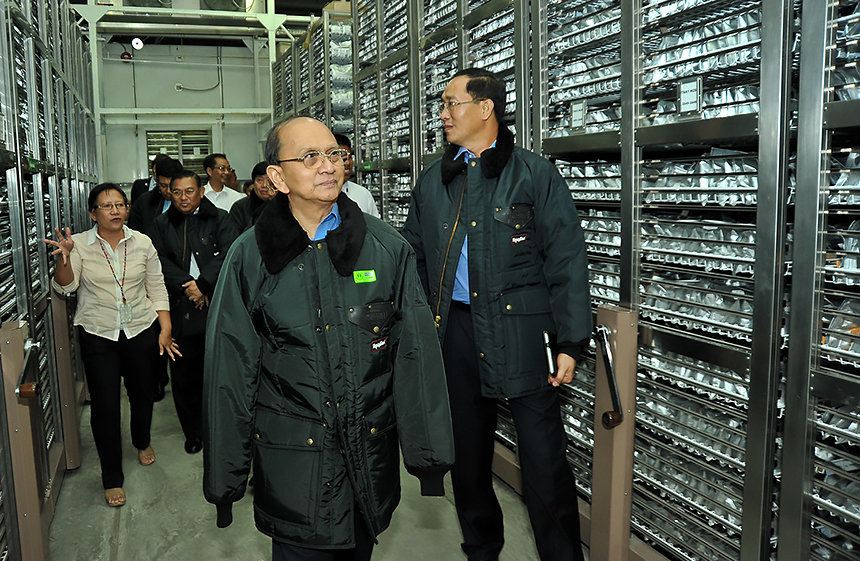 In December 2013, Myanmar President U Thein Sein, Minister for Agriculture and Irrigation, U Myint Hlaing, and other members of the president’s cabinet visited IRRI headquarters to discuss opportunities for a stronger Myanmar-IRRI partnership in rice research. Following this, in March and November 2014 a series of village-level learning alliance meetings were held, where key stakeholders learned a range of best crop management practices, and how to reduce postharvest losses.

The Government of Myanmar engaged IRRI for technical assistance on the development and implementation of the Myanmar Rice Sector Development Strategy (MRSDS, 2015-2030) which was launched in May 2015. The MRSDS serves as a guide for stakeholders to revitalize the country’s rice sector, and for Myanmar to regain its preeminent role in the global rice market. Download the country brochure to find out more information about IRRI’s work in Myanmar, including details of the current in-country projects.

EYES IN THE SKY: Landscape approach for sustainable intensification of central plains of Myanmar